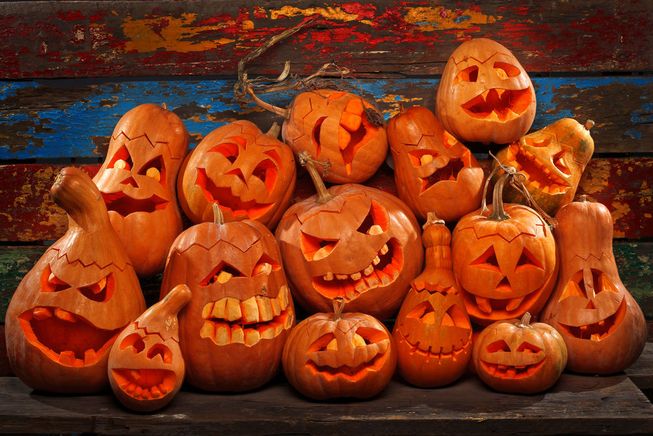 When did pumpkin carving transform to pumpkin painting?

Each Halloween season, the weekend before, I would gather up my 6 children and 6 pumpkins and we would spend the afternoon carving pumpkins.  The adults took on the task of cutting the tops off, while the kids squealed after sticking their hands inside to remove the “guts” of their gourd.

After the cleaning was done it was time for them to draw the face they desired on the pumpkin and the adults again would man the blades and cut out their design.

In later years we started using those books with patterns so they could achieve the more sophisticated designs they desired however they still had to do some cleaning and carving to get to the end.  Still it was time together, talking and laughing.  A family moment to be looked back on fondly.

Proudly on Halloween the pumpkins would be displayed on the front porch with candles burning inside.  I still remember the smell of the pumpkin with the hot candle inside, it was like a pre-view of the pumpkin pies to come in the coming weeks.

For me these memories are a BIG part of the Halloween tradition.  I thought I was setting the stage for awesome childhood memories and traditions for future generations.

I started thinking more about this, this year when a Facebook friend posted photos of her office pumpkin contest asking her friends to VOTE on the best.  While they were cute and creative all but one, yes ONE were painted.  There was only one carved pumpkin in the bunch.

So I cast my vote for best painted and best carved.  So back to the point, when did painted become the norm?  All the children missing all the smells of Halloween all the mess of Halloween.